A territory to be discovered, between sea and history.

The characteristic around-town train "Gabicce Express" enables you to reach any part of the town quite quickly and also takes you to GABICCE MONTE, where you can enjoy a wonderful panorama of the Adriatic Riviera. On fine days you can see as far as Cesenatico.

GRADARA CASTLE, theatre to the magic love affair between Paolo and Francesca, cited by the famous Italian poets Dante and Petrarca.
One of the most important venues of the summer is the "Siege of the Castle" the historical event of the season. A suggestive "direct" action replay with more than 150 actors dressed up as infantrymen, knights, artillerymen, archers and lots of special effects enabling us to relive an episode of the terrible siege of Gradara which took place in 1446.

Later the show continues inside the castle walls where you can observe the uses and traditions of the Middle Ages through performance of dances, exhibitions and battles. Pro loco Gradara Tel: +39 (0)541 964115 Cell: +39 333 7139615 [email protected]
The other line of the around-town train takes you to Cattolica.

From Gabicce Monte, towards the south, travelling by car along the panoramic route with its sheer falls over the sea, you enter the:


For nature lovers the hinterland offers a huge choice of pathways (trekking, mountain bike or on horseback) which allow you to discover the countryside and the different ecosystems (San Bartolo natural parklands, Caves in Onferno, Ventena valley in Saludecio, Cerreto area, the chestnut woods in Montefiore, the parklands of the Marano, Marecchia and Conca rivers, the wildlife oases of Torriana and Montebello).
Full of history and extremely interesting are the medieval hilltop villages such as Saludecio, Mondaino, Montefiore, Montegridolfo, Gemmano, Montebello
In the hinterland you can visit: 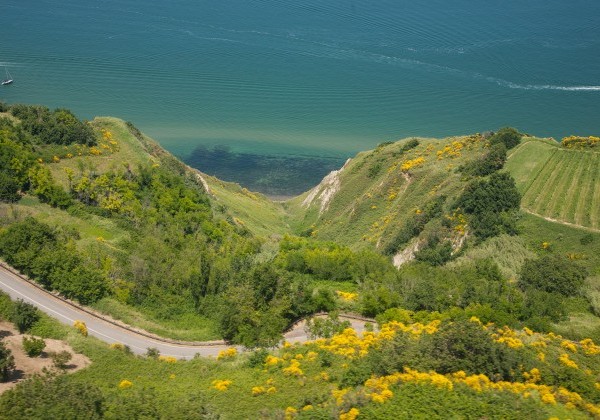